Like any pitcher, Texas Rangers Minor League Pitching Coach Jonathan Armold had his share of struggles on the mound during his playing career. 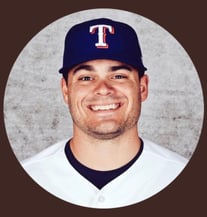 After being selected by the Milwaukee Brewers in the 30th round of the 2012 amateur draft out of Flagler College, Armold pitched in 41 games and got to Class A before being released during spring training in 2014. After considering several offers to play independent ball, he decided to turn to coaching. While earning a master’s degree in organizational behavior and professional executive coaching at the University of Texas at Dallas, he coached their baseball program before joining the Rangers in 2016.

Armold has seen both the positive and negative ways of handling a pitcher’s struggles. During his senior year at Flagler, he recalls how one of his teammates motivated him after several sub-par performances.

“I didn’t have the world’s greatest stuff,” he said. “I relied on being ultra competitive. I remember going through a few outings where I just didn’t have that fire, for whatever reason. I wasn’t being myself. I had a teammate who said, ‘Why aren’t you being a bulldog? Whenever I’ve seen you pitch and you’re really successful, you pitched like a bulldog.’ It clicked with me that I didn’t go out there feeling like I was breathing fire, feeling super aggressive. For me, it was a return to that mindset.”

Pitching struggles depend on the current situation as much as the individual’s approach to dealing with them. If a pitcher gets tagged for several runs early, Armold recommends examining his game preparation. Is it happening because he’s not loose or properly warmed up? Perhaps some extra sprints or body warm-ups are in order. Is he mentally and physically locked in from the get-go? Analyze what the process is and make sure it’s beneficial to preparation. If either player or coach believe he’s not throwing enough pitches in the bullpen, do an extra five or ten, or back off if it’s too many.

A pitcher may be cruising along the first few innings, then suddenly find himself in a jam. In such cases, body and arm fatigue may be a factor.

“If your body’s tired, that’s a strength and conditioning thing you kick up, whether it’s cardiovascular or strength-wise, where you’re running out of gas,” Armold explained. “If your arm’s tired, where you’re hitting a ‘dead arm’ period, or you’re not built up for five innings yet, your arm’s not used to it.”

What if a pitcher’s mindset changed, or he felt something different? Instead of expressing his own opinion, Armold asks his pitchers specific questions he hopes will help both parties solve a problem, such as, ‘in that inning, did anything change in your mindset?’

“If he doesn’t think he did, me sitting there pounding him over the head doesn’t make any difference,” Armold said. “Instead, I ask the question first to see if I can (a) create awareness for myself and (b) create awareness for him. He’s probably going to hear that and think, ‘My mindset did change.’ Maybe he remembers that next time.”

To get to the bottom of any issue, there must be a solid relationship between coaches and players.

“It’s one of the most overlooked things in coaching,” Armold explained. “My master’s degree really showed me that. One of the things they teach you in professional executive coaching is the idea that there has to be some semblance of a relationship first. Otherwise, there’s not going to be any sort of open and honest communication.”

The same goes for a pitcher-catcher relationship. A good catcher knows every pitcher on the staff, and can assess what cues, phrases or pitches will help in getting them back on track.

“It’s not just understanding your pitchers from a relationship perspective,” Armold explained. “It’s also understanding their stuff, how they throw, and what might get them right, and being able to tie that into a game or a bullpen before a game.”

If a pitcher must come out of the game, the best thing a coach can do is take the ball, then get out of the way.

“I usually never have any communication after he’s done, especially not after he’s pitched poorly,” Armold said. “Emotions are high, especially right after the fact. The best time to talk about an outing is the next day.”

Even the best pitchers have rough outings. Spotting the warning signs early, developing healthy two-way communication, and learning by experience will help them get a better grasp on their struggles, and how to handle them.

From GameChanger and Stephen Kerr