We know you and your pitchers have been working hard in the offseason, following our pitching program and building up those arms to prepare for a better Spring. At this point in the winter, we want to start turning our attention to increasing stamina and accuracy, and the main way we do that is by charting our bullpen workouts.

For the first of these workouts, have your pitchers throw 15 pitches out of the stretch, and 15 out of the windup. As a coach, you’ll want to choreograph the pitches being thrown, and in week one, we recommend three fastballs, two changeups, three fastballs, two changeups, fastball, changeup, fastball, changeup, fastball. This is great for kids age 15 and under, as we don’t allow pitchers younger than 15 to throw breaking balls. For kids 15 and up, you can use the same workout, or for something more advanced, replace the changeups in the second 15 pitch sequence with breaking balls.

The key to these workouts is to keep detailed charts on how each pitcher is performing. We track Overall Strike %, First Pitch Strike %, Strike % on the off-speed pitches, as well as the % of strikes out of the windup vs the stretch. We use a tool that we developed called the Gamer Tracker for charting these workouts, which can be purchased here. There's an instructional video at the bottom of this article on how to use the Gamer Tracker program. When you get into the season, use GameChanger to keep track of all of these stats and dozens more.

The numbers we shoot for are 67% strike minimum for fastballs, 50% strike minimum for off-speed pitches, and 65% strikes overall. As a coach, this should give you a pretty good idea of where your pitchers are developmentally 8 weeks into the winter—where he’s performing best, and where he needs some work.

After a week or two of charting pitches, we set up dummy batters, or have a hitter stand in and track pitches. This changes the focus a little bit by adding a new visual element, and can sometimes throw guys off. At first the numbers might skew down a bit, but they’ll tick back up as your pitchers get used to hitters standing in the box.

These pitching workouts incorporate more fastballs than off-speed pitches because we want to develop a pitcher’s arm; all other pitches come off of your pitcher’s best delivery, which is his fastball down and away to his glove side. As we get closer to the season, we can add another round of 15 pitches to the workout, and eventually stretch them out to 60 pitches.

When we are about 2-3 weeks away from the end of our Winter training, we will throw pitches in batches of three, with a goal of getting to a 1-2 count with each three pitch sequence. You’ll want to continue charting FPS% as well. Say that we are going to throw 30 pitches, 10 batches of three. We’ll want to know how many times that pitcher achieves a 1-2 count. For each time a pitcher misses that goal, we have him do 15 box jumps, or some form of “punishment,” which adds pressure, conditioning and increases focus. We like this technique for getting your pitchers in a competitive mindset as we get closer to the season, but you can also implement this after the season has started. 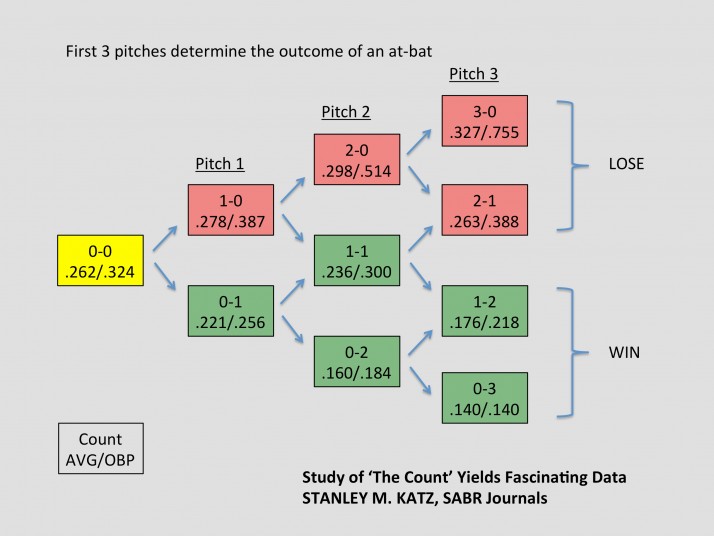 Batting averages across the board at every level of play decrease as hitters get further behind in the count. I’ve charted pitches for the top level team in the St. Louis Gamers program for three years, and when our pitchers went 0-1 vs a hitter, that hitter made an out during that at bat 72.8%of the time. As a former pitcher, and now a coach, I assure you that getting this into the heads of young pitchers is one of the most important things you can do to achieve success on your team’s pitching staff.