Top Talent Descends on Birthplace of Basketball for 2015 HoopHall Classic

In the realm of high school basketball, there is no bigger event than the HoopHall Classic, a five-day, 28-game showcase of the best amateur teams and players in the world. Both fans and college coaches alike made their way to the birthplace of basketball, Springfield, Mass., to catch a glimpse of the future stars of the game.

The top four teams in the nation according to MaxPreps, were each represented at the event: #1 Findlay College Prep (NV), #2 Montverde Academy (FL), #3 Wheeler (GA) and #4 Roselle Catholic (NJ), in addition to many other Top 25 teams.

Each clash was scored on GameChanger, the official stat program of the HoopHall Classic. Coaches, players and fans could all access a multitude of stats and shot charts for each of the participating players.

Among the countless talents at HoopHall was the consensus number one high school player in the world, Ben Simmons. Montverde’s do-it-all 6’9 small forward from Australia drew fans to Blake Arena, a 2,000-seat facility on the campus of Springfield College. The top junior in the nation, according to ESPN, Jayson Tatum of Chaminade (MO) was also on display. As was Corona del Sol’s (AZ) highly-touted 6’10 ninth grader Marvin Bagley III who elicited numerous whispers of “He’s a freshman?” from the crowd.

Many unforgettable performances and fan participation via social media made the 14th HoopHall Classic one of the best yet.

One such performance was by Huntington Prep (WV), the alma mater of Andrew Wiggins, with an impressive win over Cheick Diallo and Our Savior New American (NY) on Sunday, 75-57. Huntington was led by Curtis Jones, who had 27 points on a white-hot 7-of-10 shooting from three-point range.

Jones was nearly unstoppable from beyond the arc, as shown in the GameChanger shot chart below. 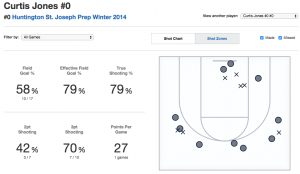 One of the many intriguing player matchups came on Saturday when Kinston’s Brandon Ingram, the number two small forward in the country, faced off against Syracuse commit Malachi Richardson, Trenton Catholic’s long range sniper and the nation’s fourth-ranked shooting guard.

Kinston succeeded in edging out the Iron Mikes, 56-54, behind 22 points, seven rebounds and four assists from their star player, Ingram, who is being recruited by college basketball’s top programs like Kentucky, Duke, North Carolina and Kansas.

Those stats only tell part of the story for the 6’10 forward. Not only was he able to make a big impact on the offensive side, but he was able to do it efficiently. Ingram was 7-of-12 from inside the arc and 2-of-5 from three-point range for an effective field goal percentage (eFG%) of .588. eFG% accounts for the fact that three pointers are worth more than two-point field goals.

In a game where Kinston’s top player was just slightly better than his counterpart, Ingram helped his team leave the historic event with a memorable win.

Later that night, one of the most exciting contests of the weekend took place, when Bagley’s Corona del Sol team took on Springfield’s own Putnam Vocational (MA).

While Putnam is one of the top teams in Massachusetts and is coming off of a 25-0 campaign in 2013-14, Corona del Sol was a considerable favorite. Ranked #15 nationally by MaxPreps, the Aztecs, with multiple Division-1 recruits, had an additional advantage with one of Putnam’s top players, Jonathan Garcia, sidelined with an ankle injury.

Trailing by as many as 13 points in the second quarter, it looked as if Putnam would go away quietly, but Tyronne Malone willed the Beavers back into the game, finishing with 21 points and seven rebounds. Guard Ki-shawn Monroe contributed two clutch three pointers to help Putnam complete the comeback and force overtime.

The upset bid would fall short, though, when Tyrell Henderson of Corona del Sol sank a tray with less than one second to go in OT, leading the Aztecs to a 60-57 victory. 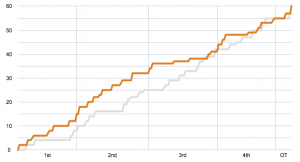 Many of the coaches use the trip to HoopHall as an opportunity to bring their players on a tour of the Basketball Hall of Fame, located just over two miles from Blake Arena. However, only one team can find their own coach’s plaque inside the building. That team is St. Anthony, and that coach is Bob Hurley, who was inducted into the Hall of Fame in 2010 and has 27 state championships to go along with over 1,100 wins on his resume.

Every bit of Hurley’s experience would come in handy as the Friars survived a 27-point performance and last-second layup attempt from George Mason-bound Ahmad Gilbert to take a 57-56 win back to New Jersey.

With teams coming from all over the country - and even one from Canada (Orangeville Prep) - many fans were unable to make it to Springfield to see their favorite team play. Those fans were able to follow each matchup as it happened on GameChanger’s Live GameStreams.

The most popular team of the holiday weekend was Kinston, as the Vikings were supported heavily by fans from the school’s home state of North Carolina. Following the event, Kinston had 48 fans, leading Oak Hill (47 fans) of Virginia and New Jersey’s Trenton Catholic (45 fans).

Many fans shared games via their social media pages directly from the GameChanger app or GC.com. Overall, there was a lot of online chatter about the event with over 700 tweets including the hastag #HHClassic. For those fans who missed the action, Recap Stories were automatically generated following each game and can be viewed by visiting any team page from GameChanger’s HoopHall Classic home.

What was your take on the 2015 HoopHall Classic? Let us know on Twitter @GCSportsHoops.