Sliding Success: How To Teach the Basics 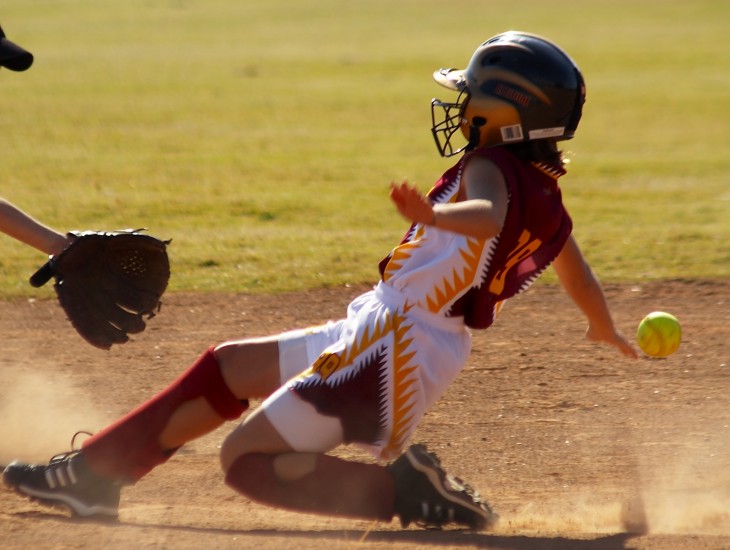 Sliding is a key skill any youth softball player should learn to master.

By the time a girl gets to the high school level, getting down and dirty on the base paths should be like second nature.

“It’s kind of something that gets overlooked in the program here,” said Eric Schmidt, the coach of the Shiocton (Wis.) 14U softball summer program. “It would be nice if we started them out a little younger, but there’s so much emphasis put on hitting and proper fielding techniques.”

With weather conditions not always conducive to working on sliding techniques and limited time on the diamond during the spring and summer, some programs in northeastern Wisconsin aren’t able to focus on sliding as much as desired.

When Schmidt was teaching the 12U players last year, he introduced sliding to the young girls emphasizing that it’s all about basics for middle school-aged players.

“Get your foot out in front of you, have your back leg underneath so your ankle doesn’t get hooked on the ground,” Schmidt said. “Always slide feet first, never with hands or head first. Your feet should be the first thing that touch the ground.”

The earlier the players are taught the correct way to slide, the more apt they are to have down the technique once they hit high school.

“At the 12U level, they pretty much have it in their head the way they’re going to do it, and it’s hard to break that mold,” Schmidt said. “Starting them younger, and if you do it the correct way, just like with anything — catching or throwing or proper batting stance — it would help out immensely.”

In one drill, the player starts from home and pretends she hit the ball. The player then practices proper running technique around first base while racing toward second and sliding in. Schmidt has variations of this simple drill, including starting at first and going to second, or starting at second and going to third.

“I know that’s more or less a base running drill, but we also try to get them to slide the proper way and do two things at one time,” he said. “I don’t do anything different for sliding at home. I never want the girls sliding into first, but second, third and home would be all the same technique.”

Continually teaching sliding is something that will only enhance a player’s ability on the base paths, Schmidt said.

“The correct repetition and having coaches that know what to do is key,” he said. “You should start out slow and go through the motions and fully build it up to game speed.”

“I think it’s very crucial,” Schmidt said. “If they’re not sliding the proper way, it could lead to a lot of injuries. Not only injuries, but during game situations, that if you slide a little early and you beat the throw, you slide too far and go past the base and you’re out — that kind of stuff. For the injury concern, I think it’s huge to teach it the correct way.”