The GC Lacrosse Podcast is brought to you by the GameChanger Team Manager app.  The essential, all-in-one, scheduling and communication app for lacrosse coaches and parents. 100% free for your team. Available now iOS and Android.

Today's guest needs no introduction. This is part one of a two-part interview with coach Tierney from Denver University. Coach Tierney has coached 7 NCAA national championship teams, including six in nine years at Princeton University and one at the University of Denver.

Enjoy, subscribe on iTunes, and stay tuned for Part 2!

On what got him started in lacrosse:

I was a baseball player in high school, and then I got to Cortland State, and it was awfully cold and my elbow was sore had thrown a lot of curve balls as a kid. My roommate was a lacrosse goalie, and so he handed me a stick and said start shooting. I loved the game and it became a passion.

On what he did to improve as a player at Cortland State:

I knew after freshman year, that I was still behind. We got after it. There's a lot of cold nights at Cortland but luckily we found a way to sneak into the field house at midnight and turn one light on and play little games to help our sticks get better. It was pretty obsessive. And coach saw something in me to keep me on the team that year.

On why he decided to attend Cortland State:

On when he realized that he wanted to be a lacrosse coach:

A lot of us that grew up in Levittown know that our parents worked very hard. My mom was a school nurse and my dad was a beer truck driver. All my dad wanted me to do we go to college. He thought I should be an accountant because I was good math. But in that process of growing up, whether it had been a little league baseball or midget basketball, or midget football, especially Phil Wolf and Nick Balitsos at Levittown Memorial, having all these great coaches throughout.

I knew how much they had impacted me. I knew that was that was the way I wanted to go. I knew I wanted to teach, but I my real passion was to coach kids, and that stems from the great coaches I had growing up.

On what coaches he looked up to and modeled his coaching style after:

I think when you play for Coach Emmer, you become a model of his style very quickly. He was detailed, to the point, very tough, but very but also very caring of his players. So I I was blessed to have played for Coach Emmer for two years and then he left for Washington and Lee. And then when I started coaching I was really lucky (to have) Buddy Krumenacker, who is still the head football coach at Farmingdale high school.

On who his mentors were:

The beauty of lacrosse's is that young high school coaches can reach out to other coaches. There were just so many men that you could turn to. Certainly Coach Emmer. Everybody had ideas, and so it allows you to develop your own ideas. But as you know, Joe, not much of its original ideas. We all steal from each other and then add our own little touch on it. And so I was blessed to have all those all those men be willing to be mentors, especially Buddy in those days.

On what he learned as an assistant coach at Johns Hopkins:

I didn't realize how much lacrosse I didn't know until my first conversation with Freddie Smith (former JHU player and coach). In my mind, Freddy Smith is the best defensive coach to ever walk the earth. I learned a lot so much about lacrosse in general, but also about being under someone else.

But I always tell people the most important thing I learned as an assistant coach at Hopkins was to trust my assistants. 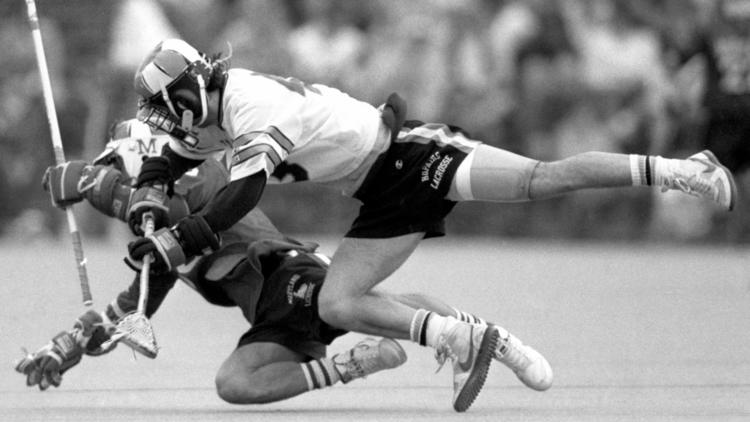 I tell my assistants all the time that. “All I ask you to do is if you don't agree with me with something come into the office, let’s battle it out. Let's talk it out. I'll always give you guys the benefit of the doubt." I'll go with your ideas but either way, when we get out on that field we gotta be singing the same song, and Don Zimmerman taught me that. Those other coaches taught me that.

In fact, I remember presenting to Zimm what would eventually become known as the Princeton defense. And at the time it was the wrong thing for Hopkins. But he listened to all that and input from Freddie and all that. Just made me a better coach, and so knowing what it was like to be an assistant, winning two of three national championships allowed me to be confident as a head coach.

On the origins of the Princeton defense?

When I was at Levittown developed develop this defense just because we had some great players. Just a bunch of great athletes. What we used to do is a little bit different than the “Princeton defense” was. We never let a guy run more than two or three steps with the ball without double teaming him from his from his backside. The rule was if you saw guys big numbers and he had the ball you just went and double-teamed him. Everything that you could do was wrong except we put a lot of pressure on guys through slides and double teams.

Fast forward to my years. when I got the Hopkins, we played what they called "the seven defense," which includes the six defensive players and the goalie is a part of that. Hopefully having guys go down the side a little bit, forcing the inside role and coming across the crease. So I've got a little of that from Freddie. When I finally got my chance at Princeton, I tried to stick with the Hopkins defense. But we found out very quickly, we just didn't have the talent to do that. So I instituted a kind of a hybrid of Freddie's 7s defense with my concept of early high pressure, slides, and double teams and then eventually worked into being in the Princeton defense

On what makes a good assistant coach?

First and foremost, being loyal to their head coach. Even at the times when you disagree. The assistant coaches that think they're smarter than the head coaches or the assistant coaches that go out on the field and start saying things to the kids that might cut down the integrity of the head coach, they're not going to last long. They’re not going to last long in life. They're not gonna last long as a head coach. Because what goes around comes around. If you act like that you're going to get it at some point. That's the number one's: Loyalty.

On advice to assistant coaches looking to become head coaches?

Be patient and understand that it takes time for these things.

Be willing to move anywhere. Where I remember when I came home from that interview at RIT around December 20th. My wife was nine months pregnant ready to have a baby. And we both grew up on Long Island. Everything was good. I was the head football coach and lacrosse coach at a great high school around my friends. And I told her "We're moving to Rochester New York on January 29th," which is about the worst time to move to upstate New York.

Don't be too picky. You got to take on take on programs that maybe aren't as good as you thought they were or as good as you want them to be. Take pride in building programs.

On what he would do differently, looking back:

I wouldn't have said some of the things that I've said to some of the young men I've coached.

I remember at RIT, we lost a tough game and I started going around the locker room telling each guy individually how he screwed the team. And I got through about the 4th or 5th guy and I'm just going. “This is wrong. This is wrong.” And so I just stopped. And I just said “okay let's just move on. we stunk today, and let's move on...”

On how he approached the challenge of recruiting to the Princeton lacrosse program:

First and foremost, all the kids had to be great students.

My first rule was "don't recruit anybody out of a losing program." Number two it was to get kids that had a little bit of a chip on their shoulder that the big boys didn't recruit him? And then number three, playing time. I just tried to get them excited about picturing themselves in a program that they were going to have a huge part of resurrecting.

On his 14-4 record in NCAA tournament games decided on goal?

I remember when we won the last national championship at Princeton in 2001, and my son Trevor (Tierney) was the goalie. I remember going to the post-game media thing. And one of the reporters asked Trevor that exact question.  And Trevor's answer was probably much better than my answer could be. It was, “He makes life so miserable in practice that the games are fun. We know that there's never going to be as much pressure in a game as there is in practice.”

We always say before we play “okay let's get ready for 60 minutes or more and be ready to go.” Stay poised and do the things we do in practice and good things will happen.

Joe’s a graduate of the University of Virginia, and Syracuse University. He’s a two time All-American, 2002 ACC Rookie of the Year, and a member of the 2003 Virginia National Championship team.

Bill Tierney (@DUCoachTierney), a native of Levittown, New York, currently coaches the men's lacrosse team at the University of Denver. Coach Tierney has coached seven NCAA DI championship teams, including six in nine years at Princeton University in one at the University of Denver. Tierney's teams have had a combined winning percentage of .750. Prior to Princeton & Denver, Tierney has successful stints at Great Neck South High School, Levittown High School, Rochester Institute of Technology (RIT), John Hopkins, as both an assistant on the men's lacrosse team and the head coach of the women's soccer team, and Team USA.

GameChanger Team Manager, the essential, all-in-one, scheduling and communication app for lacrosse coaches and parents. Unlike other team management apps, Team Manager is free, easy to use, and doesn’t serve ads. Download the app today!